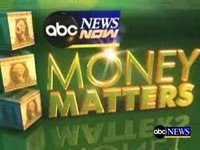 It’s one of those west coast satellite interviews where I’m picked up at my hotel at 5:40 AM, in studio by 6:00 AM and on the air by
6:30. Except things don’t always go as planned–especially in media.

I really enjoy being on shows like Money Matters because the hosts are out to give people news they can use, so there’s good natured bantering associated with the practical tips.

I arrived at the west coast ABC bureau and they put me in a studio. As they were putting on my microphone, the audio feed box broke–something clearly beyond anyone’s control. The tech (who has been doing TV stuff for 25 years) fiddled here & there and kept saying “Oh no!” and “this isn’t good.” Trust me, these are not words that bring comfort as you’re waiting to on national television in front of a gazillion people. But this guy looked resourceful and he kept fiddling, trying one thing after another.

By now, we’re 5 minutes to air. Finally, he takes a phone and a microphone, then DUCT TAPES the microphone to the top part of the phone. Then he plugs the audio feed into the phone and puts the mini earpiece into my ear. This allowed me to “hear” the producer on the phone from NY and also hear the host ask me questions! All of this you’d never know to watch the piece on Money Matters .

The result is a fun, upbeat piece on Mother’s Day gifts that you can even use for Father’s Day too, if you want to get a jumpstart on that holiday.

As a mom of so many, I find that Mother’s Day isn’t just “a” day around our house–it’s a season by the time all the gifts come trickling in from all the kids. Hope YOU have a great Mom’s Day, too!