Trier, The Oldest City in Germany!

Trier, The Oldest City in Germany! 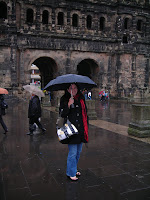 We had a fantastic time in Aviano with the military there and had the chance to do some more AFN radio and television as well. They filmed a segment that will have worldwide distribution on the AFN network and the people there were the best!

We went back to Germany and spoke in Spangdahlem with the tour. We actually gave 7 presentations that day and my kids were not surprised to find out that I did NOT lost my voice (hey! I resemble that remark!). The people we’ve met on this trip have been amazing, we are so proud of our military and their families in Europe.

After our tour at Spang, we went just outside of the base (about 30 minutes) on the AUTBAHN (Wendy was cruising at 130) and visited the oldest city in Europe, Trier. It was founded in or before 16BC. The Roman Empire subdued the Treveri in the 1st Century and left their mark in structures like the Porta Nigra (that I’m standing in front of). It was amazing to experience!

We had some German coffee and Pastries and are on our way to the last part of the tour–Bavaria.